On December 2, the AAMC Center for Health Justice responded to a request for information from the  Department of Health and Human Services Office of Disease Prevention and Health Promotion on its new proposed objective to increase voter engagement through its Healthy People 2030 initiative. In addition to its prior resources on civic engagement and support for Healthy People 2030, the center recommended that the HHS consider the structural factors that influence citizens' decision to vote or not vote, identify current and historical barriers such as felony disenfranchisement laws, consider the role of trust-building in voter engagement, and include other community resources and feedback in its processes. 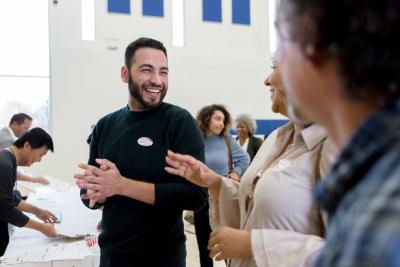 Civic Engagement: A Vital Sign of Health and Democracy

Civic engagement has a positive impact on the health of communities, providing health care institutions with opportunities to help people become more engaged. Read the polling brief to learn more.

Thought Leadership
To Boost Equity, Medical Care Must Act at the Organizational, Population and Policy Levels

Civic engagement has a positive impact on the health of communities, providing health care institutions with opportunities to help people become more engaged.

Topic:
Thought Leadership
Healthcare Organizations Can Get Out the Vote

A new op-ed published in MedPage Today and authored by Heather Pierce explores how civic engagement is good for both patients and providers.