Civic Engagement: A Vital Sign of Health and Democracy

Civic engagement means promoting the quality of life in a community4 through activities both political (e.g., voting, organizing) and non-political (e.g., local team sports, volunteerism). In the U.S. and across the world, people who are civically engaged derive direct mental and physical health benefits5,6,7,8and collectively, civically engaged communities enjoy higher degrees of social trust, social cohesion, and resource sharing — all feeding a virtuous cycle that generates even more civic participation.9 There is broad agreement that civic engagement improves individual and population health and it is acknowledged and operationalized in frameworks such as The Seven Vital Conditions for Health and Well-Being and the U.S. Department of Health and Human Services’ Healthy People 2030.

Despite these benefits, according to an August 2022 AAMC Center for Health Justice poll,10 only 56% of U.S. adults consider themselves somewhat or very civically engaged. Adults with high income (≥$100k) and with a bachelor’s degree or higher are more likely than members of other groups to report being civically engaged.

We asked about civic engagement across an array of civic activities, including voting, donating money, and contacting an elected official. Voting was the most reported activity by those polled.

The 44% of U.S. adults who self-identified as “disengaged” reported that they would be more likely to engage if they had the time (21%), held strong beliefs about something (21%), or, most crucially, knew their participation would make a difference (41%). For the 19% of adults in our sample who did not vote in the 2020 presidential election, top responses to what would increase their likelihood of voting in future elections were if they liked the candidates (28%), if they could vote by mail (18%), or if voting locations were closer to where they worked or lived (11%). Still, a very frequent response was the choice, nothing would make me more likely to vote (27%). These responses point to policy solutions like civics education11 and paid time off to volunteer or vote, for example, that would facilitate and encourage (re)engagement in civic life [See Policy Matters above].

76% of U.S. adults polled say that voting can have an impact on their communities.

Nonpartisan campaigns, initiatives, coalitions, and organizations like the Civic Health Alliance, Healthy Democracy Healthy People, VoteHealth, and Vot-ER have recently emerged to work with health and health care organizations to educate staff, providers, and patients alike about voting registration with the aim to foster an inclusive democracy. Vot-ER, for example, has expanded its reach to initiate the voter registration process for 46,000 individuals at 715 sites across the country, including members of historically underrepresented groups such as Black and Hispanic/Latino/a/x adults and younger voters.12

Despite these evolving efforts and the high level of community trust in health care organizations like hospitals and pharmacies, only 37% and 38%, respectively, of U.S. adults perceived such organizations as appropriate facilitators of voter registration and a considerable portion (16%) said they did not know or had no opinion. Poll respondents were more comfortable with libraries (77%), universities (69%), and fire stations (61%) — institutions with long traditions of supporting civic engagement — facilitating voter registration. These findings point to the opportunity to educate communities about the role that health care organizations can play in civic engagement.

While many U.S. adults do not yet see the health care sector playing a role in civic engagement activities like voting registration, such efforts would not negatively impact adults’ trust in health care organizations: a full 69% said there would be no change in their trust should hospitals work to promote voter registration, and 15% said their trust would increase. In fact, 28% of Black respondents and 22% of younger adults (ages 18-44), members of communities that often report the least amount of trust in health care institutions,13 said their trust in hospitals would increase if they offered voter registration services, pointing to health care action in civic engagement as an important strategy to demonstrate trustworthiness and promote health equity. 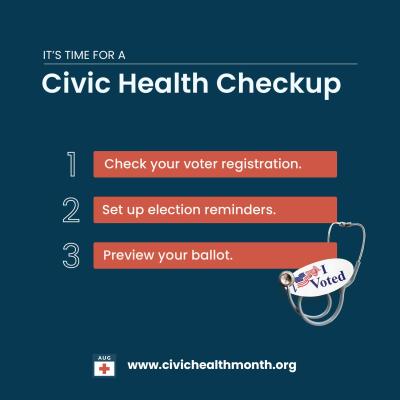 Learn more about how your health care organization can get involved in voter registration with these resources from the AAMC and other organizations working towards health equity:

• This toolkit from the AAMC and Vot-ER is full of resources for health care organizations to facilitate voter registration for patients, staff, and providers.
• The center's Director of Policy Heather Pierce explores the benefits of civic engagement for both patients and providers in MedPage Today.
•  The Civic Health Alliance's compact helps health care leaders integrate civic engagement into their organizations' systems and policies.

Thought Leadership
To Boost Equity, Medical Care Must Act at the Organizational, Population and Policy Levels

Topic:
Thought Leadership
Healthcare Organizations Can Get Out the Vote

A new op-ed published in MedPage Today and authored by Heather Pierce explores how civic engagement is good for both patients and providers.

One year later, we’re celebrating what we’ve accomplished so far, and making plans for the year ahead.