The U.S. is the only high-income country that has not enacted a national paid family leave program. Although the Family and Medical Leave Act of 1993 provides for up to twelve weeks of job-protected leave for eligible workers, that leave is unpaid.1

Notably, the U.S. is facing an unprecedented increase in the number of pregnancy-related deaths and adverse postpartum physical and mental health conditions.2 Recent research from the Centers for Disease Control and Prevention (CDC) and 14 Maternal Mortality Review Committees across the country found that a significant number of pregnancy-related deaths were preventable, indicating that current strategies and interventions to improve maternal health outcomes are insufficient.3 In the context of enduring racial and ethnic inequities in maternal morbidity and mortality, the CDC noted: “Understanding differences in the underlying causes of pregnancy-related death by race and ethnicity is important for identifying prevention opportunities to reduce inequities in maternal mortality.”4

The leave variables were converted to a single mutually exclusive variable using the following hierarchy: paid leave, unpaid leave, no leave taken. All paid leave estimates are among women who worked during their pregnancy. Due to limited sample size, only data for non-Hispanic White, non-Hispanic Black, and Hispanic women were analyzed. The PRAMS survey does not ask respondents about their gender identity, so the language to report the survey findings uses the term “women” in accordance with terminology used to collect data used for the analysis, rather than including the AAMC Center for Health Justice’s preferred addition of “birthing people,” which encompasses all who give birth.

In 2020, 49% of women who were employed during their pregnancy took some form of paid leave following childbirth. A significantly larger number of White women (51%) took paid leave after giving birth than Black (42%) or Hispanic women (40%) (Figure 1).

More than half of the total costs of maternal morbidity for U.S. births in 2019 were due to adverse maternal mental health conditions, including postpartum depression. 7 Our review of PRAMS data found that women who took paid leave following childbirth were less likely to report depression both before and after giving birth than those who took unpaid leave or no leave, though as described above we found that taking paid leave was associated with confounding factors, namely, household income and race (Figure 4).

These analyses add to the growing body of evidence that paid leave after the birth of a child is associated with improved maternal health. 8 The data show that women from minoritized racial and ethnic groups and women with lower household incomes were less likely to take paid leave, and more likely to develop postpartum depression than their more privileged counterparts. A national paid leave program would therefore likely narrow unjust and avoidable racial, ethnic, and socioeconomic inequities in maternal morbidity while benefitting all birthing people.

These findings also point to the need for timely and routine mental health screenings and treatment in the prenatal and postpartum periods. Results from a recent AAMC Center for Health Justice poll on the experiences of birthing people in the U.S. showed that Hispanic or unemployed individuals and those with lower incomes are less likely to be screened for mental health complications during or after pregnancy.

Although there will be financial costs to employers and likely the nation if a comprehensive paid leave program is implemented, research from many countries, including the U.S., demonstrates that paid leave has economic benefits not only for the people who take it, but also for communities, contributing to wage increases and a more stable workforce. The economic impacts of paid leave — for beneficiaries and for employers of all sizes — warrant further exploration, taking into account the negative economic impacts of postpartum mental health challenges, including depression.

Finally, this research underscores the need for authentic community engagement and improved data collection efforts to gain a better understanding of and act upon the racial and socioeconomic maternal health inequities that persist in the absence of a national paid leave program. 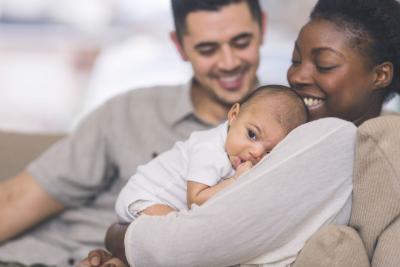 Learn more about the AAMC Center for Health Justice and our work to advance maternal health equity.

• It Takes a Village: A Multisector Approach to Health Equity for Women and Birthing People includes recommendations from a May 2022 convening of individuals from across sectors to develop a common understanding of the data needed to address maternal health inequities.
• The AAMC Maternal Health Fact Sheet (PDF) highlights the efforts that the AAMC and its member institutions have undertaken to combat the maternal health crisis and strengthen the systems that improve the health of birthing people and their infants.

A nationally representative poll of 1200 people who gave birth in the last five years shows a diversity of pregnancy, birth, and postpartum experiences.